A Windy Day At Meon Springs 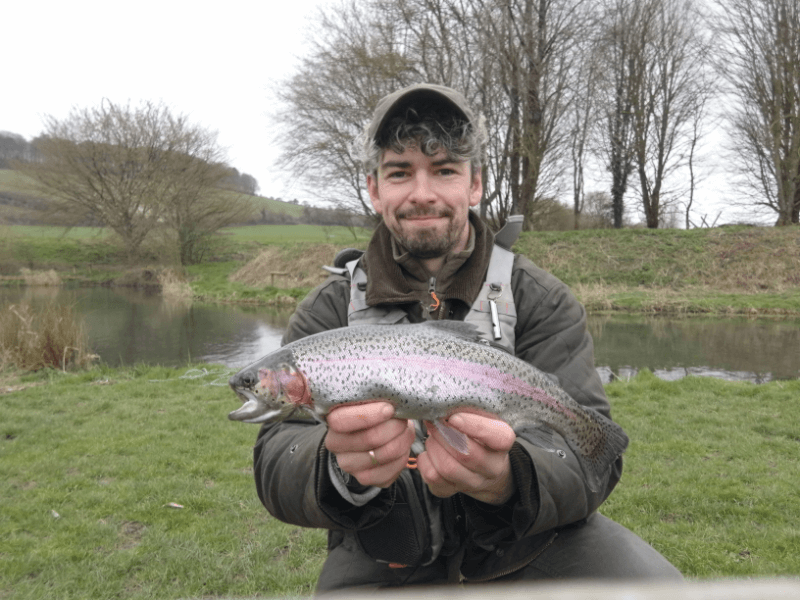 Fly fishing is all about technique when it comes to casting. Unlike beach fishing where you can pretty much just whack on a bait and lob it out there, fly fishing takes real skill to get the lure in front of the fish. When the wind is blowing, it’s even harder. Of course an experienced fly fisher will have the casting ability to deal with most conditions – but I am not that angler. I mean, I’m not exactly a scrub; in perfect conditions I can get a line where I want it to go perhaps 80% of the time! But in the wind…let’s just say I need more practise.

However, never one to back down from a challenge I dismissed the weather report and headed down to Meon Springs Fly Fishery in pursuit of a rainbow or two for the BBQ.

It was a chilly March morning, but I was wrapped up warm and ready. On arrival at the venue, I noticed the water had a heavy ripple meaning I would be fishing blind most of the time.

Anything orange or yellow

As I was setting up, another angler was just leaving with three decent sized trout in tow. “Anything orange or yellow” he cheerily advised as he was packing up. Grateful for the tip, I looked through my fly box and chose a little orange buzzer that I thought would do the trick. With the fly tied on, I was ready to go.

From the first cast, I felt the effects of the weather. I was casting directly into the wind and the first two presentations were…messy. To say the least. I tried to remember what I had been told about dealing with windy conditions, pausing longer on the back cast, slightly more ‘flick’. In time I managed to get the line out straight, but with only about two thirds of my usual distance. Hopefully the fish are close in today I thought!

It didn’t take too long before I got my first bite. It was a small rainbow, a little under a pound and unfortunately this individual didn’t have too much fight in it. I played the fish pretty much straight into the net without really any effort. Oh well – they all taste the same I suppose!

After landing fish number one, I moved to the smaller lake to see what conditions were like there. This proved to be a good decision.

A tale of two fishies

At Meon Springs, the smaller lake is more sheltered from the elements and the effects of the wind were far less pronounced. I could actually see the fish this time, so I set about targeting a larger specimen. Immediately I was getting follows and a few times I pulled the fly away from smaller fish as they were about to bite. I spotted a decent one and managed to get the fly in the perfect position. The fish spotted the fly and turned onto it – this is it I thought! Then, out of nowhere, a smaller trout zipped in and tore away with it before I even had a chance to react! Not the fish I wanted, but at least I was on.

My initial disappointment at missing my target fish was quickly allayed. This fish had some fight! Multiple times when I thought I had it beat, it once again took off for another go. I even thought I might lose it at one point, when the fish was on a particularly powerful run. Impressive for a fish not much bigger than the first one.

At last I netted the spirited little rainbow and that was that. A brace of fish ready for the BBQ and a successful morning of angling.

Meon Springs Fly Fishery is a day ticket water offering both catch and keep and catch and release fishing. A two fish ticket is £38 and a voucher will be given for any uncaught fish.